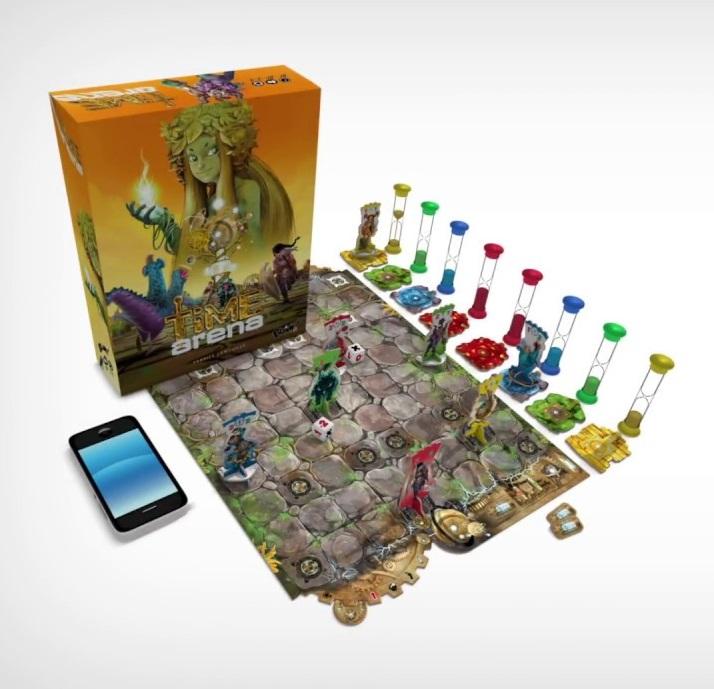 Through relentless wars for its control, the Time Lords endangered the source of immortality.

To avoid its drying up and their own demise, they created the Arena of Time: a sacred place where they fight, summoning the spirits of warriors from ancient times or from distant galaxies.

Those who manage to dominate time and destroy the opposing Totem obtain the right to access the source and thus ensure the lineage of the Time Lords.

Time Arena is a showdown game for two players or two teams.

You control four fighters, and your objective is to destroy your opponents' Totem Pole - but time is running out and you only have five minutes ...

When the stopwatch indicates "0", you lose the game!

In more detail, players take turns performing their team's actions, after which the other player's (or team's) turn begins.

Each player has five minutes, which they can use as they wish throughout the game.

At the start of the game, the first player triggers the arena clock, which counts their time.

When they decide their turn is over for whatever reason, they skip the game by pressing the arena clock.

This ends both their countdown and begins the opponent's countdown.

You will also have to deal with another factor of time since each of the characters forming your team has a specific cooldown.

When a character is destroyed in the Arena of Time, their hourglass is flipped and the character returns to play after all the sand is used up.