Today we are going to talk about Meduris!

Following the call of the gods, the players settle down at the foot of Meduris mountain.

Building huts, bringing offerings to the druid, collecting precious runestones, and building monumental temples is the only way to gain the favor of the gods in Meduris.

1. Skillful use of workers allows you to obtain valuable materials. These are needed to build huts and temples.

2. The larger the colony, the more expensive it is to build a lodge there. But if you can get into the good graces of the druid by making an offering, then your efforts are rewarded.

3. Keep an eye on the other players: who is going to secure the best construction sites at the right time and collect the most valuable runestones?

4. Only a player who skillfully sets up their huts and temples, and keeps enough materials ready for the final grand round of offerings, will win the game.

Snow White, Robin Hood, King Arthur, the Pied Piper and King Triton have decided to build the village of their dreams!

But at the top of the nearby mountain, a dragon has taken up residence in the abandoned castle ...

He does not look favorably on these newcomers who invade his lands and regularly come to steal his wealth.

In this asymmetrical game, one player is the Dragon who tries to scare the Heroes ...

These are embodied by the other players who team up to clear two rooms of the Castle or build their Village.

If they can do it before the end of the ten rounds, they win the game.

On the other hand, if the time passes or if the Dragon manages to frighten them, this one is declared the winner.

To survive the long and terrible winter that is approaching, the dwarves must prepare.

It's time to collect gems, build castles, and stock up enough food.

The fire dragons are sleeping.

The fall is precious and is vital to plan your actions well.

Dwar7s Fall is a game about collecting gems in order to exchange them for food.

In the meantime, you will also have to build your dwarf kingdom and kill monsters.

In this game you have several ways to win by choosing your actions carefully.

Each turn, you can perform 3 actions (place a kingdom tile or place a dwarf in a tile or move a dwarf one tile).

Each tile has a prerequisite of how many dwarves of a player are needed to perform one type of action.

For example: Emerald mines always have three slots, but you will only need two dwarves to pick up an emerald.

Once this task is completed (collect an emerald), your two dwarves will return to your pool.

When a player completes three goals (both open and secret goals count), the final phase begins.

The players who had not taken this turn take their last turn and, then, the game ends.

Points are calculated and the game with the most points wins.

Today we're going to talk about Age of Towers.

You have just found a mine filled with precious energy crystals!

Precisely the ones you use for your daily magic.

The problem here is that you also stumbled upon a horde of monsters!

And to make matters worse, three other cities seem to have discovered your mine as well.

As they rush into danger to extract the precious crystals, you have no choice but to join the fray ...

Age of Towers sees you and your opponents fighting to defend your cities against the oncoming wave of monsters by building defenses, placing traps and channeling these beasts to your opponents' cities!

In more detail, each turn has three phases: night, dawn and day.

During the night, the event card is applied and the monsters progress in your path (each type having a different movement value). Two other monsters (or your boss) appear in your path.

At dawn, the towers can attack a monster of a particular type on one of the four adjacent squares, or the boss.

During the day, each player can choose one action among the four available, then they can take an additional action, whether it is the same or different.

Each type of monster has a movement value (1-3 spaces) and perhaps a special ability; all monsters in the base box have 2 hit points.

The boss, who is not a monster, is more difficult to kill because he has 10 life points; when a player successfully kills it, the game ends.

Whenever a monster or boss leaves your path to reach your city, you lose a number of city guards equal to their movement value.

After the game ends, each player adds their victory points from three sources: number of city guards remaining, amount of damage dealt to your boss, and achievements (which are drawn at random at the start of the game).

Today we are going to talk about Minute Realms!

Minute Realms is played over 8 rounds.

Each turn begins by dealing a card to each player, face up, plus two, always visible, in the middle of the table, accessible to all, then each in turn, chooses an available card and places it in their Kingdom.

We can choose the card that has been allocated to us, in this case we build it.

We can also choose a middle card or one allocated to another player.

In both cases, we give our card instead.

We must also perform all the commercial actions related to the card you take.

- receive one or more coins (from the reserve)

- pay one or more coins (either to the player from whom the card was taken, or to the reserve if you took it from the middle)

You can also erect a defensive tower.

In this case, we turn the card over and place it in their Kingdom.

A turn immediately earns us 2 coins, in addition to increasing the defense of our Kingdom.

Invasions   At the end of the 4th and 8th turns, each Kingdom must resist the 'invasion.

To do this, you simply have to count the emblems of the Kingdom and compare it to the value of the Invader tokens revealed.

The consequence of a bad expenditure is the loss of a building: the card is turned over (thus increasing the defense of the Kingdom) 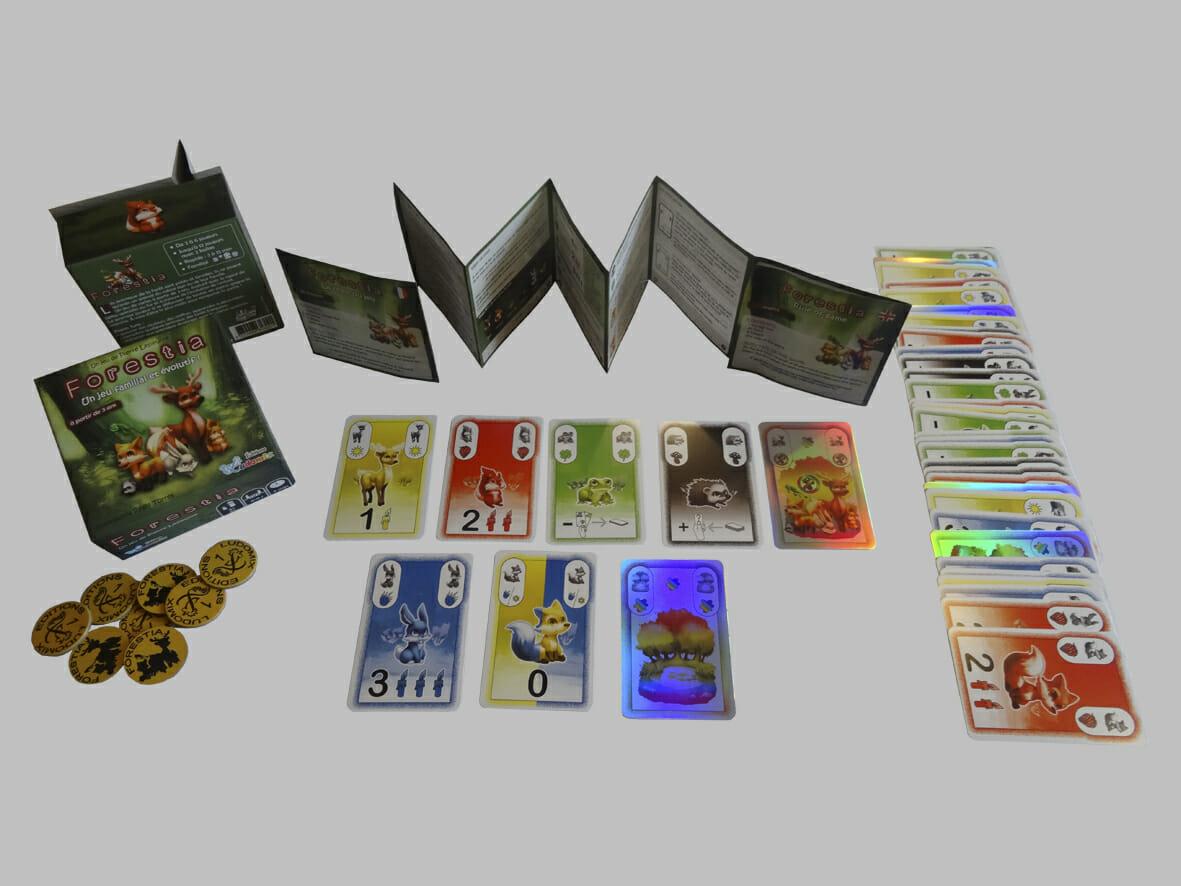 “Forest animals are small and shy, they only play with an animal of the same age or from their family. "

Forestia is a discard card game for ages 3 and up.

The first player to discard all of their cards wins a token.

The object of the game is to be the first to win the expected number of chips at the start of the game.

The duration of a game is less than 5 minutes, which corresponds to the concentration capacity of a 3-year-old child.

Forestia is a fun way to learn to count and count from 1 to 3.

This game allows you to play with colors, then gently lead the child to count the candles on the cards to learn to count while having fun.

Then the first tactics with the first special card: the Joker card.

Forestia is an evolving game with the addition of special cards as the child evolves.

At 6 or 7 years old, the child can play with all the cards. 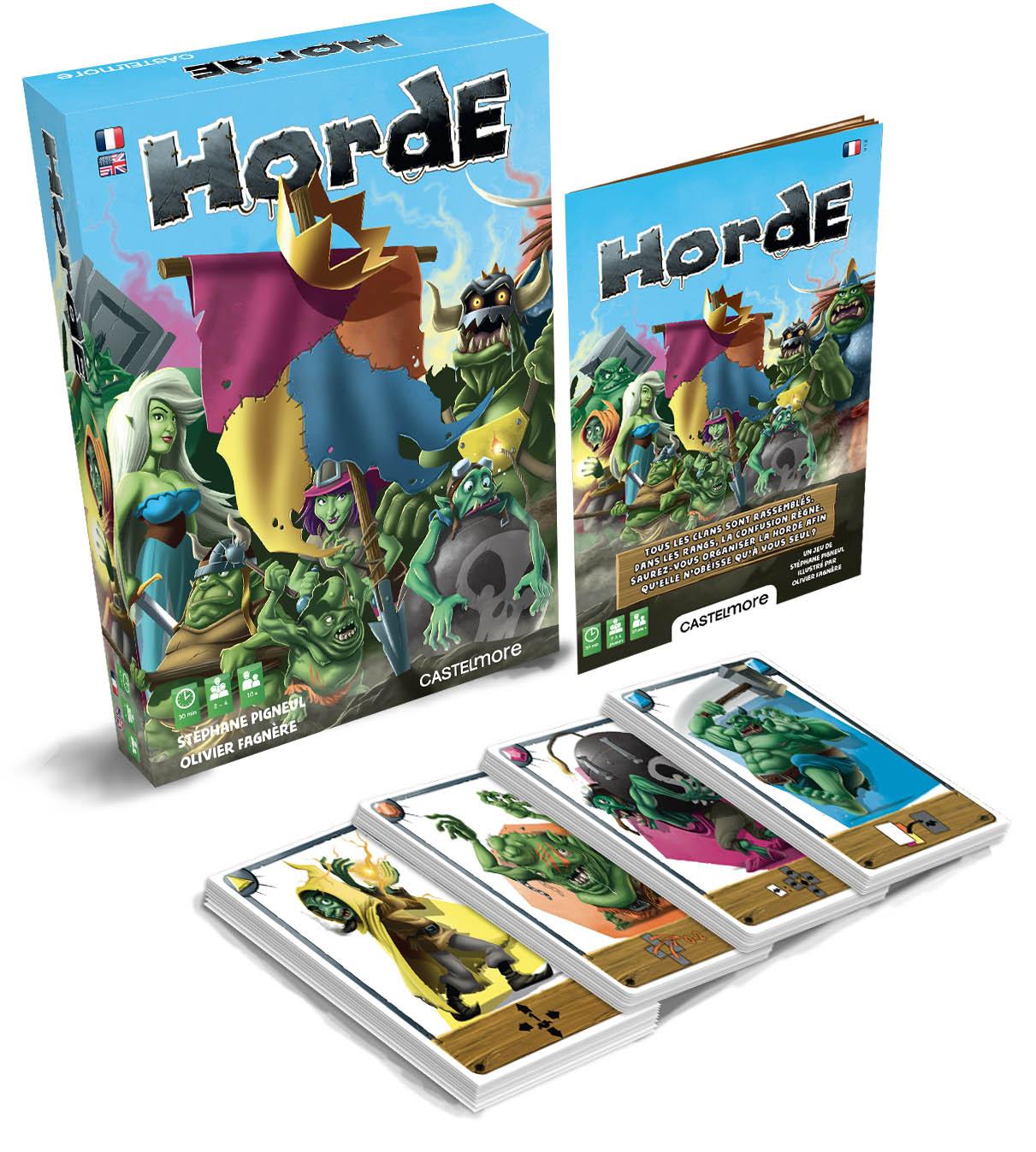 All the clans are gathered in the ranks, confusion reigns, will you be able to organize the horde so that it obeys only you?

During the game, the players have the cards representing goblins in order to form battle lines, that is to say rows of twelve cards.

Their objective is to line up the cards of their color in order to be in the majority in as many battle lines as possible in order to score victory points.

But each time a card is put into play, others change places!

The player of the clan who has the most victory points at the end of the game is declared the winner.