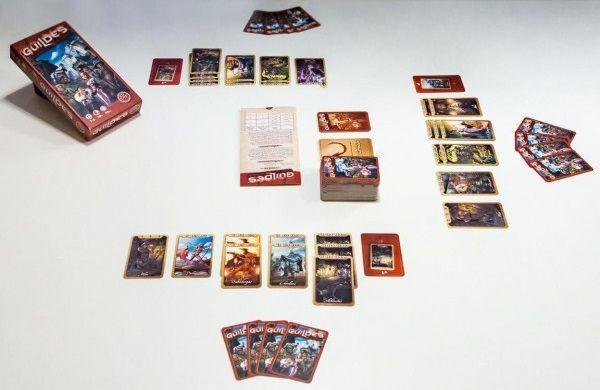 You are looking to be elected at the head of Portyl, a medieval city made up of various more or less powerful guilds who will have to convert to your cause in order to recover their votes.

The election takes place in three rounds, with a count of the votes in each round.

At the end of the third round, the player with the most votes will be named the head of the city and will win the game.

The guilds that will have to be courted are 10 in number and are more or less powerful.

The more powerful they are, the more votes they bring, but the more they can be wooed.

To find out how powerful a guild is, just look at the top of a guild card. - The first number indicates the number of cards available for this guild, and therefore, so to speak, the "power" of the guild.

And finally the values ​​to the right of the card give the number of votes that will be distributed during the last ballot.

Exception to all this, the "Militia", which gives its owner 3 votes per card on each ballot. There are 15 "Militia" cards in the game.

Each ballot takes place in the same way in 5 phases:

• 2. Revelation of an event card