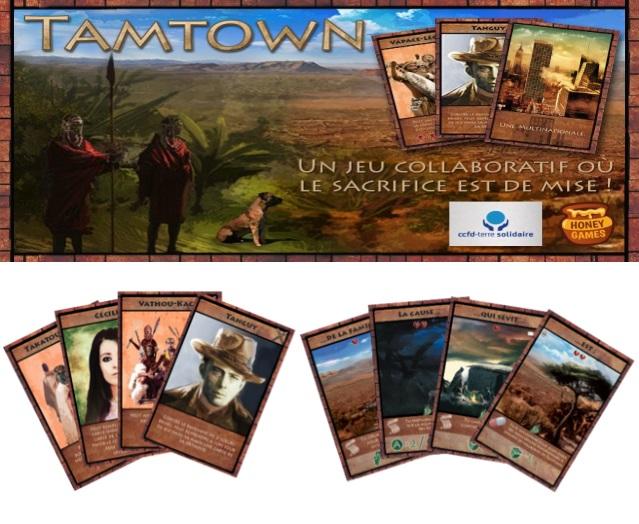 Hello everyone ! Today we're going to talk about Tam Town.

Tamtown is a village in a southern country, where famine has caused the disappearance of several villagers in recent days.

While the origin of these premature deaths is a lack of food, its cause and responsible remain obscure. It is to identify them and get the village out of its nightmare that Jétou, the village chief, calls in investigators to help him in his quest for the truth and stop the devastation.

A mysterious informant, undoubtedly touched by the fate of Tamtown, disseminates snatches of messages forming a text leading to identify the cause and the responsible of this famine.

To retrieve and order these messages, families and investigators unite to face the events that are fierce against the village and take action at the price of time.

As long as the cause and the responsible are not identified, time does its work and famine increasingly reduces the number of villagers ...

Will players be able to ward off the spell before they see the village disappear? Will they be savvy and united enough to counter the misfortunes that befall Tamtown?

Only a team spirit will reverse the spell and reveal the truth ...

The object of the game is to uncover the Cause and then the Culprit of the famine before each family has lost all of its members.

To do this, the players have pieces of sentences on their cards (the clues) that they must put judiciously, in a very specific order, to recompose 2 messages.

Each complete message is made up of 4 cards. These 4 maps, when put together, form a panorama depicting the environment of Tamtown, one by day and the other by night.

The problem is that to ask these clues players have to spend time materialized by broken hearts. Each card played or placed costs 1 or 2 broken hearts.

Each family having a limited number of members (between 4 and 6), players must arm themselves with ingenuity to avoid ousting their partners.

To see how far will go the spirit of collaboration of the players and to highlight that a selfish one leads everyone to his loss, it is planned that only one player can win the game!

It will be the one who survives, of course, and who has the most broken hearts in hand at the end of the game. So, will you be the player who has avoided helping your partners?

Or the one who will have been able to help his neighbor to bring out the best among us?

Victory is not won, it is earned and offered to us!