The dice owes its name to the Latin "datura" which means "given by lot".

2400 years BC the first dice were found in the Indus Valley (present-day Pakistan).

The Indians were the first dice players.

The earliest traces of their ancestors the knucklebones date from ancient Egypt.

Found in the tombs, they were used as amulets and for divination.

The ossicle never stabilizes on the rounded faces but on the 4 flat faces (where the numbers are put).

In ancient times, four bones were thrown at a time and the total was counted.

The first pipé ossicle dates from the medieval period when it was filed and sealed.

The games of throwing and the games of chance were the two dice games played by the Romans.

Julius Caesar when he crossed the Rubicon without permission used the expression "alea jacta est" literally "the die is cast".

The Greek Palamedes and his troops played dice during the siege of Troy.

They appear in France around the 12th century at the time of chivalry.

In some cities there are even “Scholae Deciorum” or Dice Game Academies. 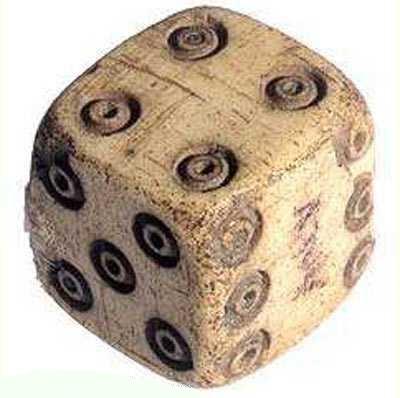