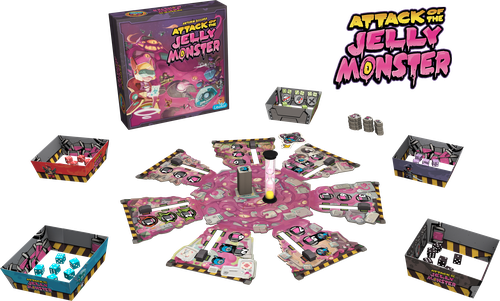 Today we're going to talk about Attack of the Jelly Monster!

A jelly monster is invading the city!

You and your squad must collect as much alien material as possible before it is destroyed by the military in 4 hours.

The dice are your squad and you have to be better than the rest!

To collect alien jelly, place your dice on the different quarters.

Only the player who has the majority thanks to the value of his dice will win the reward!

Roll your dice, place one (and only one!), Then re-roll everything before putting another one.

Choose each dice wisely because, in addition to their value, they have powers that you can apply immediately.

A mission too easy for you?

Everyone is playing at the same time!

To be the best squad in each neighborhood, you'll have to be faster AND smarter than the others!

Attack of the Jelly Monster is a chaotic, tactical party game.

Roll your seven dice frantically to get the majority, but don't go too fast!

All squads play simultaneously, and one of them just might win a quarter under your nose!

Be smart by using the power of your dice at the right time.

When frost invades the city, call the Jelly Squad!