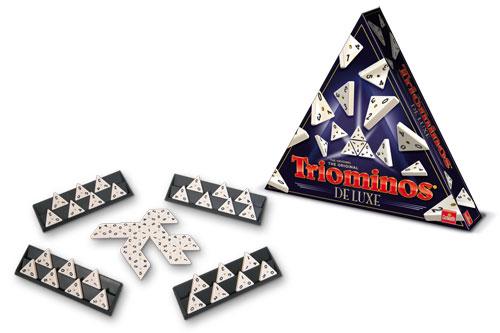 The triomino is played a bit like the domino, that is to say that each player draws an identical number of tiles and in turn places a tile on the table, the round ends when a player has stopped. Cleared of all its tiles To connect his tile to those on the table, a player has three possibilities:

1) he can put a tile whose side is the same as that of a tile already on the table by touching the identical sides,

3) he completes a hexagon by placing a tile with two sides touching two different tiles.

Placing a tile using the first method only awards the value of the tile, while making a bridge gives a 40 point bonus, and completing a hex gives a 50 point bonus.

When a player has placed all of their tiles, the round ends.

The other players then subtract the value of the tiles remaining in their hand from their score, while the one who has finished the round adds this value to his score.

If at the end of a round a player has reached 400 points, the player with the highest score wins the game.